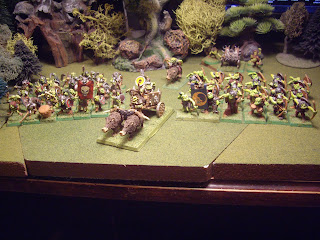 In honor of Ernie's ORCTOBER project, I end this month as I began it, with an Orcy post!  I originally intended to have my first regiment of undead, a nice unit of skeleton reapers, ready for Halloween, but I was only able to finish about half of them.   Oh, well.  Next year, maybe.  Anyway, I got Slahzgore Ironbelly painted, and here he is, in his Orcy chariot, along with the rest of what I've got for my painted Orc and Gobbo collection so far.... 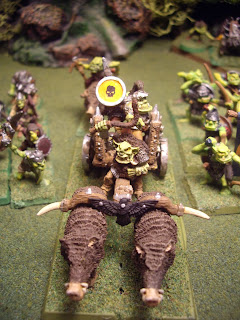 Slahzgor is an Orc hero well known for his daring and murderous depredations in the Black River country.  I plan to use him as my Army Commander until I really get the army rolling.  Eventually, when I get up to around 3k points or so, I'll bring in Big Blackie, my Level 25 Black Orc Horde Commander, and Slahzgor will become an independent character model, but for now I think he'll do for a general..  According to Warhammer Armies, Orcs are supposed to have Wolf Chariots, but that just seems all wrong to me, so I swapped the wolves out for some old school boars.  Note the raven nailed to the front of the chariot, a crude and defiant message undoubtedly aimed at the Baron von Refn, whose famous Raven Standard has flown above many an Orcish defeat in this region over the last twenty years or so. 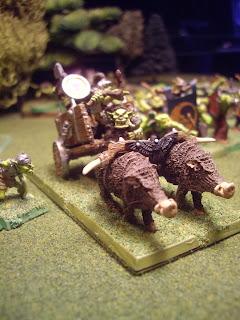 So far I've got Slahzgor, here, Bungole Bushwhacka, another independent character, 36 Gobbos, 24 Orc arrer boys and the Leadbelcher.  Not a bad start, but I've got a long way to go to hit my goal of 6,000 points. 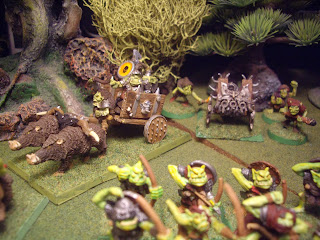 To get the army 'legal' I need the compulsory 20 Orc warriors and 20 stickas, all of whom are currently sitting rather impatiently on a bookshelf, giving me dirty looks and waiting for me to get around to them. Another unit I want to get to soon is a nifty company of 20 Orc boys with extra hand weapons.  (Still need to acquire 4 troopers to finish the unit).  Anyway, hopefully I'll get another regiment or two done before the end of the year, and get them into action against the Baron and the Dwarves of Thunder Mount in the New Year. 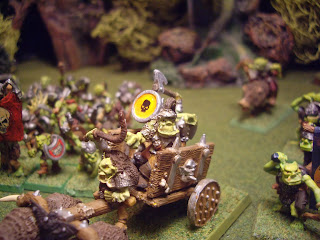