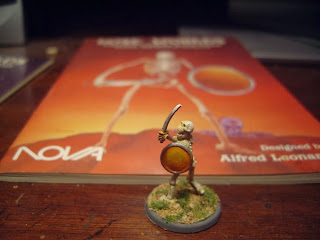 So my latest retro-gaming obsession, (like I need another one, right?) are these little Lost Worlds combat books that were published some thirty years ago by NOVA games, and which always looked interesting to me.  The fact that each one of the Lost Worlds character booklets was modeled after a specific Ral Partha miniature from RP's mid-eighties glory days whet my appetite even further.  Best of all, they're dirt cheap.  I got all of mine for $4 or $5 each, and about 90% of the minis are still available from Iron Wind Metals.  The concept looks very simple and entertaining. Good for whiling away an evening when friends can't stay long enough for a full blown game of Warhammerocalypse. 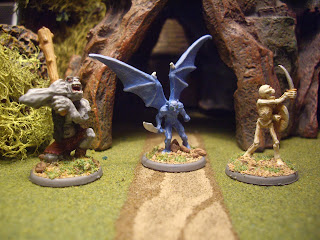 Curiously, the miniatures don't matter one bit to the game unless you get one of the deluxe boxed adventure sets, both of which I got recently outrageously cheap on that glorious triumph of the free market system we know as ebay.  Woo hoo!  Got to love those auctions that end at odd hours.  The adventure sets each contain a 3-d tactical map of a dungeon setting in which your characters can maneuver on each other as they try to get hold of various ancient and powerful magical artifacts.  Eagerly anticipating their arrival in the mail. 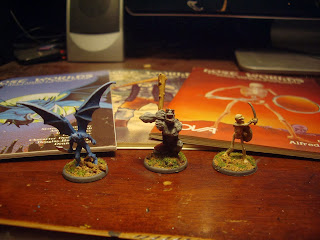 Going to spend most of next weekend at my childhood friend and fellow geek John's house and am looking forward to trying a few games with these three fellows, as well as the Barbarian, Wraith and Dwarf.  (Which I obtained a long time ago but which I've yet to paint up.) 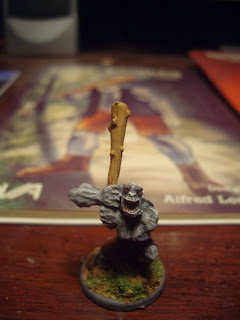 A quick glance through the books hints that each character has a set of strengths and weaknesses unique to himself, and the book points out that not all characters are created equal. Some are much stronger than others, and will probably have to be teamed up on by a gang of weaker characters.  The Forest Troll, here, for example, has almost three times the hit points of your average human character and can take on 2 opponents at once, something few creatures can apparently do.  The skeleton is weak, but can regenerate damage by picking up the bones you knock off of him and fitting them back into his frame.  The gargoyle is also considerably tougher than the average human character, and, obviously, has the advantage of a pair o' wings. 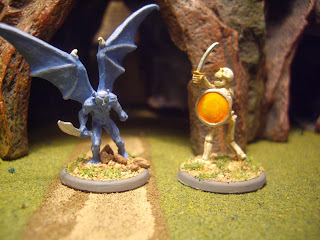 So...warming up the time machine, and we'll see how my weekend expedition to the Lost World of goofy 80's nerd-gaming goes.  With any luck, I shan't return.
Posted by Mouse at 1:12 AM