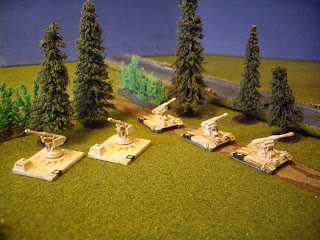 Steve Jackson's Ogre was one of my first loves in wargaming.  My friend John and I played my plastic little boxed versions of Ogre and GEV until the cut-out counters and rule books practically fell apart.  Still love the game, but as I get to be older and increasingly tired-eyed and cantankerous, I found I've lost patience with tiny bits of card-board printed in eye-splittingly miniscule type jumping around on folded paper maps. 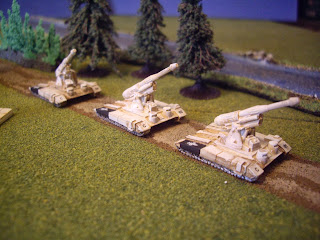 Miniatures, then.  The Ogre Miniatures game has been out for about a hundred years, but its only been in the last year or so that I've begun to seriously consider investing in it.  Recently I broke down and bought my first box of Ogre miniatures, and have started daydreaming scenarios during idle hours. The boxed sets available online are really reasonably priced, I think, given what some metal minis go for, and quite nice.  I was pleased to find that I could get enough infantry and vehicles together to play the Ogre basic scenario for only about a hundred U.S.  The only thing that bugs me is that the infantry minis are not in scale with the vehicles, but I can see why they did it that way. 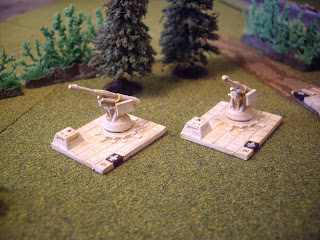 The little campaign backdrop I'm dreaming up is set on the English Channel coast.  These guns belong to the 19th Normandie Division, one of the many territorial formations which were called upon again and again to repel raids by the Combine from across the English Channel.  If Steve Jackson Games ever released sets of decals for Ogre minis, I haven't been able to find them yet.  Too bad, 'cause I have zero talent for painting insignia free hand.  So, instead of the Pan European hoplite helmet device, I've marked these batteries with  their divisional badge, in this case, the Fleur de Lis common to many territorial divisions of the former French republic. 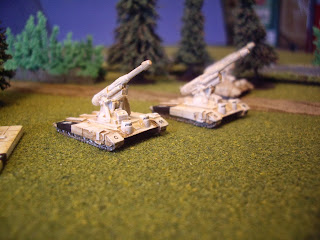 Next up will be an Infantry PanEuropean battlesuit battalion and command post, or a Mark III ogre, I'm not sure which I want to just yet.