Report: My Expedition to the Lost Worlds 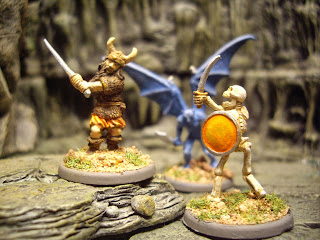 So.  This past weekend I climbed into my time machine and traveled to my childhood buddy John's house for a weekend of old-school gaming.  I brought Fourth Reich and Full Metal Planete, a lovely old game, and my Lost Worlds books and minis, which I was eager to try out.  John had purchased Black Morn Manor just for the occasion and we were looking forward to giving that a spin as well, but the only game we ended up playing was Lost Worlds, 'cause we had just that much fun with it.  Even John's wife Maggie was charmed by the concept of the characterful little books with their matching minis and tried a couple of games. 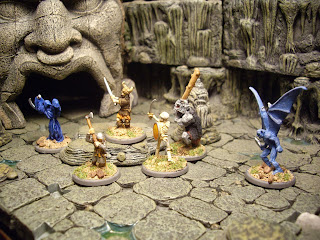 LW is a very fast and very simple game, but we were impressed by the amount of work which must have gone into the system to make it function as smoothly and in as much detail as it does.  The game books themselves are strictly bare-bones, and provide you with NO background, fluff, or scenarios.  I can see that after a short time, simply matching one character against another would get pretty monotonous,  but I can also see a good deal of potential in it for creating your own fun little scenarios and adventures, especially when you just don't have the time or space for something like an Oldhammer game. 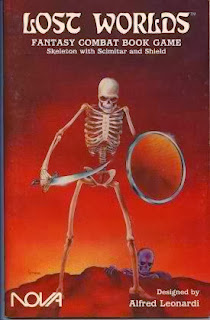 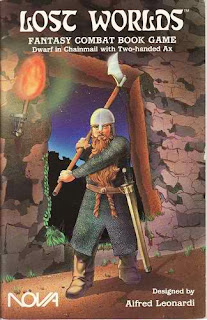 I had books and minis for 6 characters:  The Skeleton, Wraith, Dwarf, Barbarian, Forest Troll and Gargoyle.  First in the arena were the Dwarf and Skeleton, and in the ensuing series of combats, the Dwarf soon emerged as a top contender.  He quickly reduced the skeleton to kindling  in three back-to-back fights, then took down the wraith and the barbarian in that order, and without  much more trouble. 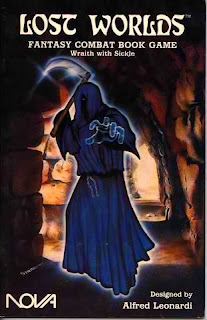 Next we tried pitting the Wraith and Gargoyle against each other.  I had assumed that the Wraith would be pretty tough...y'know...Nazgul and that...but he actually folded up very quickly under the Gargoyle's attacks.  Weenie. 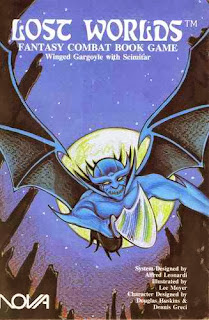 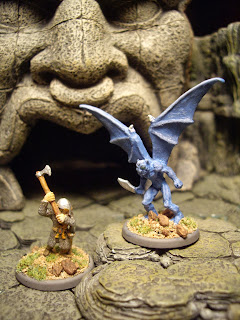 We then decided to give the Gargoyle a worthy adversary and put him up against the Dwarf, our champion up to that point.  In the first fight, the Gargoyle broke the Dwarf's axe coming out of the gate, leaving the stout little chap with a huge negative damage modifier and no way to inflict a significant wound on his enemy.  After a few rounds of stubborn but pointless resistance, the Dwarf wisely decided to head for the hills at a brisk jog, leaving the Gargoyle in possession of the field.

After stopping for an hour or so in a nearby grove to replace his broken axe-handle, our Dwarf returned to try again.  A tough and lengthy contest ensued in which the Gargoyle soon proved his worth.  I had assumed that he would be designed as a fairly weak hand-to-hand opponent, with  his main asset being his air-mobility.  In fact, the gargoyle was tough, with a lot of hit points, good damage modifiers and a collection of nasty special flying attacks.  After a hard fight, the Dwarf, hitherto undefeated, finally succumbed. 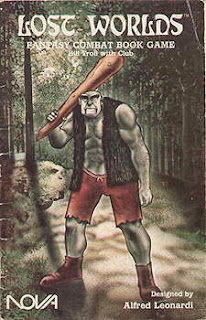 After breakfast on Sunday morning, we managed to squeeze in a few more games before I had to go.  We decided to try Skeleton vs. Wraith, and these two managed to kill each other with a single blow each in the very first round of close combat, confirming our suspicion that they were both strictly featherweights. 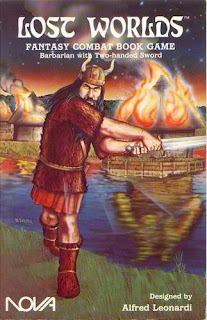 For the very last game, we brought out the Forest Troll, and pitted him against a team of two:  The Dwarf and the Barbarian. It was the best game yet.  The Troll has a LOT of advantages, including many, many hit points, and I assumed he would stomp my two companions pretty quickly and thoroughly, but the devious adventurers quickly learned that if the Barbarian struck high while the Dwarf struck low on each round, the Troll was only able to parry one of the two attacks, leaving himself open to the other.  Although it didn't wok perfectly every time, and the Troll did manage to deliver one shrewd buffet to the Barbarian's head, the fight was clearly moving in the direction of the Troll's defeat.  By getting in an arm wound from the barbarian on one round, and a leg wound from the Dwarf the next, it seemed clear that the bearded duo would eventually wear the Troll down through the use of their cunning Wolf-Pack tactics. 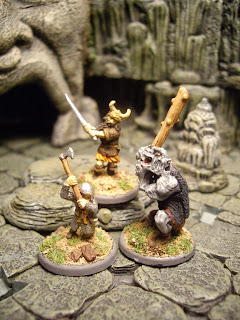 Then came the turning point.  The Barbarian crowned the superb fight he had been putting up so far by delivering a tremendous downward cut onto the Troll's bony head, shearing away 11 of the monster's remaining hit-points and dazing him.  It was a coup to make his tribesmen back home stand up and cheer, but it had the unfortunate additional effect of driving the Troll into a berserk rage.  The triggering of the Troll's RAGE feature had the potential to be a real game-changer.  The Troll flung his club at the barbarian, a desperate gambit which at least temporarily deprived the troll of his primary death delivery system, but the Troll was down to his last hit point and the risk was well run.  The flying tree-trunk struck the barbarian in the head, dropping him below zero hit points, knocking him out cold and putting him out of the fight.  Left to carry on alone, the Dwarf valiantly refused to leave his fallen comrade.  Knowing it was all or nothing now, he hurled himself at the Troll in a series of all-out attacks.  The Troll kept jumping back, using his regenerate ability to recoup two of his lost body points each turn.  When he'd brought himself back to five hit points, he felt sufficiently prepared to rejoin the fight.  At precisely the same moment, the two combatants stepped forward and met each other toe-to-toe.  Simultaneously each struck out and brought a magnificent blow down about the head and shoulders of the other.  The stroke of the Dwarf's bright steel axe clove the Troll's bony pate in two, taking him below -5 hit points and killing him outright.  At the same moment, the Troll's great tree-trunk club rang off the Dwarf's helm, bringing him below zero, but not below -5 body points, so that he was stretched senseless on the ground.   The Troll was dead, but the Dwarf and Barbarian would eventually come to, collect their loot and drag themselves painfully off to the local bar to soothe their wounds with beer and and the attentions of buxom tavern girls. 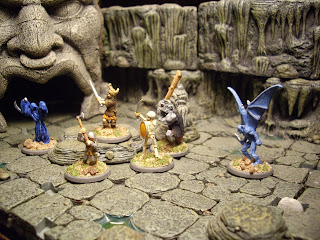 At last it was time to pack up my toys and my wife and make the tiresome journey back to the tiresome present.  But I'm certain that this won't have been our last expedition to the Lost Worlds!
Posted by Mouse at 11:42 PM